The Provincial Grand Master Constituted, Consecrated and Dedicated the new lodge during which the Provincial Grand Chaplain. VW. Bro. the Rev. Howard Pashley, gave a most interesting Oration about the origins and moral tendencies of this particularly beautiful order. All present were most impressed and intrigued by his rich words.

W. Bro. Peter Williams, the Deputy Provincial Grand Master, then proceeded to install W. Bro. (Now RW. Bro.) Tom Quinn into the chair as Primus Commander, after which W. Bro. (Now RW. Bro.) Archie Torrance, Assistant Provincial Grand Master, delivered the Address to the Master, this being most appropriate as the new Commander and W. Bro. Archie both hail from Scotland and so were able to completely understand each other!

The Senior Warden, and the Junior Warden, W. Bro. Nick Letherby, were invested. The remaining officers were then elected or appointed and duly invested by the Worshipful Commander, who had individual comments for each officer. He then greeted and thanked the officers and the remaining Founders for their support in getting the Lodge off the ground.

The By-Laws were adopted and the Officiating Provincial Officers were then elected as Honorary Members with great acclaim by the Founders. The Provincial Delegation lead by the PGM retired in procession. During the rising the Scribe read applications for Elevation from W Bro Alan Jenkins and Bro. Major Alan Sanford and proposed them as our first Candidates, it was planned for their ceremony to be held on the 14 February 2013 (wives and sweethearts permitting!).

After formal photographs and a quick trip to the bar some seventy seven brethren enjoyed a Festive Board of traditional home made steak and kidney pudding with an excellent vegan alternative. The new Lodge Charity Steward, W. Bro. Ian Gallehawk, was summoned by the Worshipful Commander to present a cheque for £300 in favour of the Kent Mark 2020 Festival, which the Provincial Grand Master accepted with much surprise and grateful thanks.

During the response to the toast to the Worshipful Commander, W.Bro. Tom Quinn presented the Organising and First Lodge Scribe, W. Bro. David Stiff, with a specially labelled Bottle of Port (his well known favourite tipple) as thanks for his efforts in organising the Petition and arranging the festivities of the day. He accepted the gift with grateful thanks and not a little embarrassment.

The founders and their guests then departed in love and unity looking forward to many successful years of extending Royal Ark Masonry in the North Kent area.

The picture below shows the RW. Provincial Grand Master with the Consecrating Team. 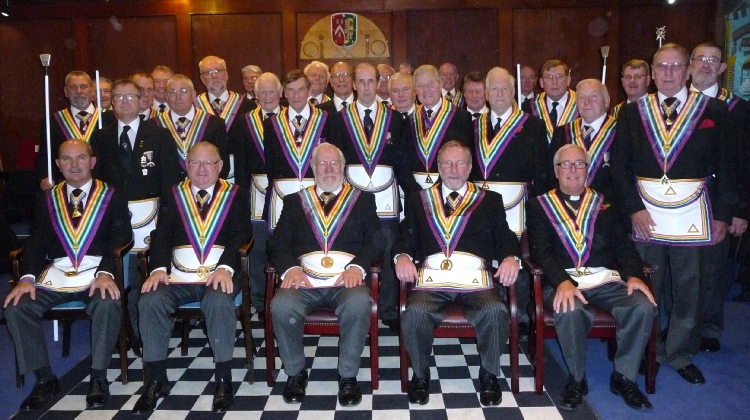