As well as the history on this page, further information can be obtained by using the sub menu links on the left of the screen.

Details of the Founders and Past Masters of the Lodge, as well as an explanation of the Lodge Crest can be found by using the sub menu headings on the left of the page.

.Any visitor to a Masonic temple will have seen examples of Lodge banners from various degrees in Masonry proudly displayed for all to see. Erdemont Mark Lodge wasted no time in acquiring its own banner. This would not have been possible had it not been for the effort and generosity of Mrs Janet Stiff, who worked tirelessly to ensure that the Lodge now has a banner, of which any Lodge would be truly proud! The banner is dedicated to the late W.Bro. Rod Letherby, who was to be the founding secretary but passed to the Grand Lodge Above just as plans were being finalised. A picture of this very large and imposing man can be seen in the Founders' gallery. A larger image of the banner can be seen by clicking on the thumbnail image to the left.

The Lodge history would not be comlete unless reference were made to W.Bro. David Stiff. It was W.Bro. David, who initially developed the idea of forming an Erdemont Mark Lodge. There followed many months of hard work on his part. His enthusiasm and determination never wavered. No obstacle was too large. The Erdemont Mark Lodge came into being because of W.Bro. David and we all owe him a considerable debt of gratitude. The picture below shows W.Bro. David receiving deserved congratulations from the RW. Provincial Grand Master. 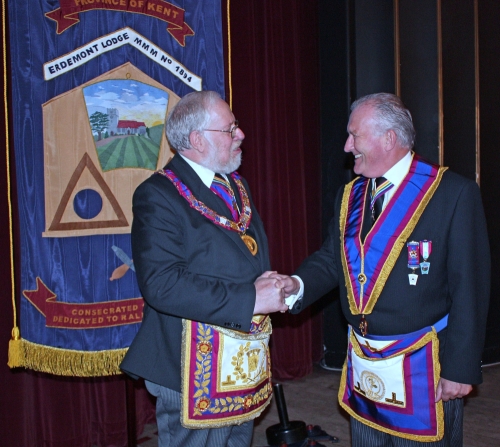